Here's an interesting point of view.

So, I'm convinced the sea monkeys are using biological warfare in my house. It's the only logical explanation for all the illnesses tallying up around here. I've been either taking care of sick individuals, or have been so sick myself that most things have come to a grinding halt at la casa de Quinn (or chez Quinn for my legions of silent French Canadian lurkers.)

Not much writing going on, and definitely not much cleaning which is, after all, the sea monkeys' primary agenda. (Ooooh those wily sea monkeys. *shoots evil glare at ceiling in general direction of sea monkey domicile*) My major aspirations at the moment are to lie in bed, drooling and moaning. But that doesn't get to happen until pretty late at night after everything else is done.

Now I'm comparing remedies. Should I go with Jack, Jose, Jim, or the kickapoo joy juice fermenting in a jug on my kitchen floor? Oh the choices one must make.

In the entry on Blues Writers a few days back, I mentioned at the end I would talk about the old brags. I still plan on doing so, but it's going to take more concentration than I have in stock at the moment. Just contemplating my remedy choices is enough to wear me out. Therefore, I leave you with my oath, my solemn vow that I will carry out the decimation of the sea monkey tribe which resides in my bathtub. That is, after the joy juice wears off.
Posted by Ava Quinn at 12:37 PM 8 comments:

Hi everybody. Just remembered I said I would post a shot of the thrift store boots. They're a little big, but I'm definitely enjoying them. Here's the pictures, and yes, all you silently lurking foot fetishists of my blog (you know who you are) that is me wearing them. So here's the happiness I bought for $6. 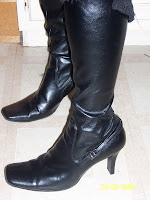 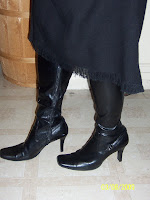 If Google were a dog, it would be humping my website's leg.
Posted by Ava Quinn at 8:26 PM No comments:

Writers of the Blues

I'm a Blues fan. Muddy Waters, Buddy Guy, Robert Johnson, Pinetop Perkins, Howlin' Wolf, Sonny Boy Williamson, B.B. King. There are so many great blues artists out there. One of the unique things about the blues is the sharing of songs. The Blues are American. They began like storytelling where one person would sing a song and travel around with it. Others would take it up and modify it for their own tastes. But there are some standards that all the greats have sung at one time or another.

The Blues started in the south. The main place they grew from was the Mississippi Delta. They moved up river with the Great Depression to the big cities in the north where the men went looking for jobs. Chicago was where they really took root and the electric blues were born from there.

But that uniquely southern talent of turning a phrase stayed with them no matter where they traveled.

Here are some of my favorite lines from a few of the great blues songs.

"You got another mule kickin' in your stall." - Long Distance Call - Howlin' Wolf

"Got my mojo working, but it just don't work on you." - Got My Mojo Working - Muddy Waters

"Squeeze my lemon til the juice runs down my leg." - Traveling Riverside Blues - Robert Johnson (most notably, though he probably took it from another blues singer)

Songs You Must Play at 11

There are certain songs you just have to play loud. Ones you wish you could turn all the way up to eleven. Here are a few of my favorite songs to jam - in no particular order.

There are a lot more on my list, but I figured I wouldn't share them all. Leave an air of mystery surrounding me. So, give. What songs make your arm have that involuntary reaction to turn up the volume as soon as you hear them? I promise not to tease you, even if it's Tunes by Englebert Humperdink to Hum in the Shower.
Posted by Ava Quinn at 10:47 AM No comments:

The performance begs the question, "Did he lose a bar bet?" And yet I can't help but luuuuurrvvv him! I'm completely enamored. I totally wanna be BFF with him.
Posted by Ava Quinn at 10:41 PM 2 comments:

The Good, The Bad & the Ugly

You may not know that song, but just like Alice's Restaurant, it's highly entertaining. Yesterday was a good day. It was beautiful weather for early March in PA- in the 60's and partly sunny. So I got the Ninja out, and it had its maiden voyage for the spring. Not only did I get to ride my motorcycle, but I rode it to my writer's group meeting. Double happiness!

Once a month my writer's group gets together. I really look forward to the meetings. Lots of great people to talk to, new ideas raised, sometimes guest speakers. (I'm the speaker for September.) No one spoke today, but we all did some writing, or broke out into discussion groups. I wrote almost 400 words in fifteen minutes. Probably more like ten since I was giving out Mac instructions for combining documents to one of the other members. And motorcycle tips to two others for their heroes. (I think I may ask if the group would be interested in a motorcycle talk - Realistic Motorcycle Logistics.) Plus we got two new members.

Then we went to lunch. There were twelve of us who went together, and even though we went to a restaurant I'm not crazy about, I got to sit near and talk to people I probably wouldn't have regularly, and had a nice time.

After that, I took the long way home on my cycle, did some speeding (made it up to sixty on some back roads) and came home. All in all, a really good day.

The Bad~
Last night is my most dreaded night of the year. I hate when daylight savings time begins. I hate losing an hour's precious sleep. I love to sleep. I love to nap. I love to zonk out. And when I lose sleep I can become a real grump. I know it's completely psychological, but I just can't stand this day. Conversely, when daylight savings time ends, it's just about my favorite night of the year. I get an extra hour of sleep! I treat it like the holiday that it is. Right up there with Christmas and Easter.

So today I'm a little grumpy, but I'm counteracting that by wearing my new black high heeled knee high boots that I bought a week ago at GoodWill for the costly amount of six dollars. Pictures are forth coming. I made out like a bandit at GoodWill last week. I've been meaning to blog about it, but haven't gotten around to it.

The Ugly~
For those of my readers with weak constitutions, I advise you not to view the following picture.

He must need the helmet now because of all the brain injuries he's incurred over the years. It's the only logical explanation I can come up with for the outfit. Via con dios crazy banana hammock wearing deviant.
Posted by Ava Quinn at 7:59 AM 5 comments:

Okay, so I couldn't just let it be boring. Recently I was doing some casual research on carnival sideshows/freak shows. Don't ask. I came across the carny terminology for deformed babies preserved in jars of formaldehyde. They are called pickled punks.

So here's your assignment should you choose to accept it. Try to casually insert one or more of the following phrases into an everyday conversation a la Steve Martin in Leap of Faith, and see who notices first.

And for bonus points - testicle tattoos
Posted by Ava Quinn at 9:31 PM No comments:

A Good Writing Day for Me

I wrote five pages today. Over a thousand words. That's pretty good for me stealing a few minutes here a half hour there (if I'm lucky). The problem is that my writing time is so broken up over the course of a day. I don't usually have a big chunk of time to get writing done. So I spend half of the precious five minutes I've acquired rereading what I previously wrote to try and recapture my train of thought. Very frustrating.

I'm going to have to renew my search for a critique partner. I have someone in mind, (Don't panic. It isn't anyone who reads my blog - big collective whew as you wipe the nervous sweat from your brow) but still need to approach her.

I have another contest coming up that I think I may enter. Mainly because of the editor judging. I'd like to try and see if I can get my prologue and first chapter in front of her. That's a big if. I'd have to be in the top five to get to the big judge. It might be a nice ego stroke if I could do it. I could use one of those right about now.

So on a separate note, any one have any author suggestions for romantic comedy from a big name press? Looking to do a little research.

Well, boring post, but got to get back to my wip. I'll attempt to be more entertaining next time. To tide you over until then, check out the whacked-outedness of the content of the previous two posts.
Posted by Ava Quinn at 8:41 PM No comments:

One for the WTF Files

What is wrong with this picture? (Well, there's lots of things, but I'm going for the really whacked out portion.)

Take another look. Are you seeing this or have I fallen and hit my head?

Why is a man posing like this, and how did he get those pants on? I'm not even sure where to begin here. Hello Kitty Doms? These guys fall into the muzac category. Were these men really that hard up for work? What was the thought process that went through the minds of each of these guys when they took on this job? Was it a twelve step sort of thing where it finally ended in sad acceptance?

You know when they were getting dressed for this gig, there was no eye contact between these men at all in the back dressing room. Yet they are now bound by something like a fraternal order with silence being the key.

So let's hear it. Lay it on me. What do you think? Even if it's just open-mouthed shock.
Posted by Ava Quinn at 1:31 PM 5 comments:

I was feeling a little nostalgic today. Remember this creepy guy?

He also sings Hankerin' for a Hunk of Cheese and Sunshine on a Stick. He'd be on in between the Saturday morning cartoons. Along with all the Schoolhouse Rocks.

So what were your favorite PSAs that would air between Speed Buggy and Hong Kong Phooey {I loved him and Penelope Pitstop}? Or were you a Puffnstuff fan?

Chime in with your favs - either cartoon or PSA. Don't worry, I won't judge you. Even if you admit to Rainbow Bright and The Snorks. Big of me, huh?
Posted by Ava Quinn at 5:58 PM No comments: