Ok, so I'm going to be guilty of this again. I'm swamped with craziness for the next week, and then Chez Quinn is going mobile the week after that, camping at the beach for a week. But, dear readers, I could not leave you stranded without serving up some specimen of surreal zaniness that is my specialty.

For you long term, hard core Tongue In Cheek readers, this batch of re-runs will hopefully serve as a greatest hits tribute. For the newly initiated, enjoy! But beware this disclaimer. There are sometimes when a barf bag may become necessary at some point.

Got a call from the doctor at 10:15 last night. Blood test results are in, and it's definitely Lyme Disease for the oldest urchin. He believes it was caught early enough that there shouldn't be any lasting, long-term effects. She's been on the antibiotic for almost a week now, and the fever finally broke a few days ago.

I worked this weekend. 1 p.m. til 9 p.m. Friday night, 8 - 4:30 Saturday, Sunday and Monday. I was scoring assessments of the most disabled students in the state. Chained to a computer in one cubicle among many in the cubicle farm, watching children take tests. Many of whom just shouldn't be taking them. I'd like to chain the politicians who drafted and support No Child Left Behind to those uncomfortable chairs and watch hour after hour of severely disabled children grappling with assessments that mean nothing and cost those children much. Let alone the tax payers.

I signed a confidentiality contract, so I can't go into detail, but suffice it to say, many of those tapes can be harrowing.

I kept hoping for an exit like Neo got from Morpheus in The Matrix. Embedding was disabled, so I couldn't post it here.

Unfortunately no such escape was provided. The best I could do was declare Monday Hawaiian shirt day. But apparently no one else got the memo.

Oh well. At least my hula girl shirt was a hit.
Posted by Ava Quinn at 1:30 PM 2 comments:

Labels: a peek inside, but seriously

Ok, so last week it was Nursemaid's Elbow. This week - Lyme Disease.

The oldest urchin, who is six, has had a pretty high fever since Sunday afternoon. I finally got her in to the doctor this morning and his hypothesis is Lyme Disease. As if the little urchin needed anything else this year.

As you may or may not know, to check for Lyme disease blood must be drawn. When she heard that, the eyes got wide and teary, but then she took a deep breath and said, "That's okay, Mommy. I'm an old pro at this."

That's when my eyes got teary.

So she sat on my lap like she usually does for blood work, shocked the nurse by telling her it was a tourniquet that was being stretched around her arm, and then tried valiantly not to move or cry during the procedure.

She was the bravest little toaster that ever was.

So now she's on an antibiotic for the next twenty-one days and the fever has still not gone away. What a way to start her summer vacation.

And the youngest urchin has upped her terrible threes game by a power of at least ten in protest to all the attention the older one is receiving right now.

Ahh, chaos. Lovely, lovely chaos. And I'm still not getting any writing done. I wonder why.
Posted by Ava Quinn at 1:15 PM 8 comments:

I finally got a new bathing suit last night. Ever since the wardrobe malfunction on the beach last summer, in which I issued a public apology to the inhabitants of that section of Rehoboth Beach, I've needed a new one.

Well, I got one last night.

It was a family affair, so you can imagine the unadulterated joy it was to bathing suit shop - which I hate - with The Man and Urchins in tow. I basically got the one that I could tolerate and called it a night.

It also has cups of steel. I kid you not. I could knock on these knockers and hear a resounding ~BONG~. I feel like I should be sporting a helmet with horns protruding from each side and wielding a spear as I descend from Valhalla.

If only I could work it like Bugs bunny, then at least I'd know I looked good.

But alas, I fear I wear it like Helga, the opera singing warrior in my old favorite video game Clayfighter.

I originally was trying for some rockabilly style. It has that vintage pinup vibe about it. Here's a picture. It doesn't show the cups that well, but you get the idea. 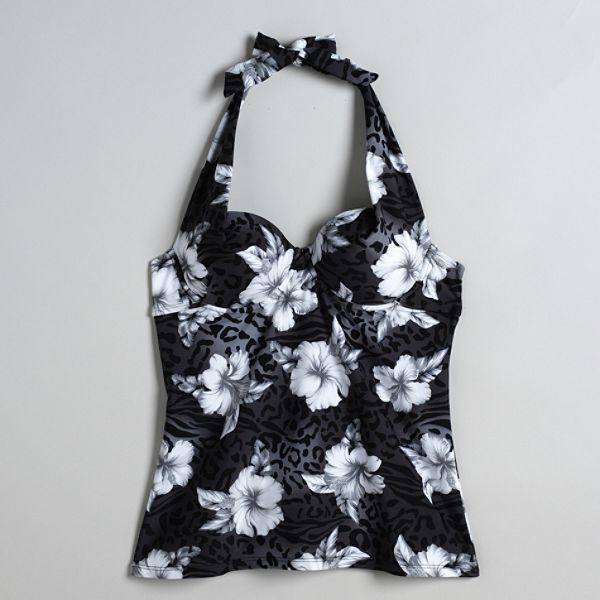 I may add little gun barrels to the center of each cup just to give a nod to the Austin Powers Fembots. We'll see.

Speaking of vintage pin up girl style, if you haven't checked these guys out, you're no hep cat of mine. I love their designs.

So, any bathing suit disasters you'd care to share with the rest of the class? We're all ears!
Posted by Ava Quinn at 8:28 PM 8 comments:

Labels: a peek inside, crazy musings, showing my age

Gotta Have Some Soul

I just needed a little vintage R&B tonight. Add a little Soul, and this is what you get.

And this song always takes me back to that night I was underage and on the dance floor in a bar down in Delaware. And that's all I'm saying about that.

The following story is true, the names have been changed to protect the innocent.


The oldest Urchin bursts into the kitchen where I'm cleaning up lunch and doing dishes, shouting for me to come quick.

I remove myself to the yard and observe the three year old lying in the grass crying. As I help her up, I get the fragmented and most likely, highly polished version of what happened from the eldest of the urchins.

She fell. Older urchin grabbed her arm to help pull her up. Much crying ensued.

There being no other witnesses to the altercation, I try asking the three year old- who is crying profusely. Which is actually very uncharacteristic of her. Through the tears and around the blowing of the nose I get, "Sissy pulled me."

I settle the youngest on the couch with an icepack on her arm and some tv to soften the blow and take the eldest out to the end of the driveway to put her on the bus.

When I re-enter the domicile, The crying has stopped, but younger urchin is very pale. I proceed to examine the arm. She can wiggle her fingers, though making a fist hurts, she can move it, but wails and immediately begins crying again when she bends it. There are no marks on the arm or swelling. Tylenol and liberally applied ice packs are administered.

Symptoms don't change for several hours. That evening I call the doctor's office. There are no appointment openings, but the nurse takes down the symptoms and says she'll tell the doctor and call back. Within fifteen minutes I get a call from her requesting that the subject come in immediately.

Diagnosis: nursemaid's elbow. One of the lower of the two bones in the elbow joint has come out of its socket, causing extreme pain whenever it moves. The doctor was able to pop it back in quickly and less than thirty minutes later the youngest urchin was back to her crazy rambunctious self.

And that is only one of several extremely crazy things that have happened over the past four days.

Hope things aren't quite so exciting at your house.

For My Classically Trained Readers

It's a little known fact that I played the violin for many years. (You never would have thought they had gnome sized classical instruments, but they do. The Eastern Deciduous Woodland Gnome Orchestra is a highly respected institution. But, alas, that is a post for another day.)

Here, for your viewing pleasure, is an oldie but a goodie that's been around the internet for a while. Yet still just as hilarious.