My MacBook, which is about seven years old and has been being very crotchety this past year, is really starting to crap out. Which makes doing any social media a chore.

I've developed a long and harrowing relationship with the stupid spinning beach ball. It's becoming my trigger, like Pavlov's bell. I see that thing and in ten seconds I'm enraged with impatience.

It puts a big damper on my writing as well. It takes literally ten minutes just to open a wip. Then more of my hair is torn out in absolute frustration quality time is spent with the spinning beach ball with every command I give. Don't even get me started on saving said wip.

I've been backing up my computer daily, which, you guessed it, takes even more time to do now than ever before.

So I'm feeling badly because I haven't been getting out to the blogs I love (see sidebar for all the cool cats to visit). It just takes up so much time that I don't have much of.

To help me chill out and get through, I'm dedicating this song to the swirling beach ball. Enjoy some Funk on this Funky Friday. I hope it takes you into a fantastic weekend.

Labels: a peek inside, isolationism, music, my evil streak, writing

One thing to know about the Urchins at Chez Quinn is they insist on having either extremely deep, soul searching or utterly bizarre conversations while in the stalls of the ladies room. I'm not sure what it is about public bathrooms that inspire such deep thoughts, but apparently in my girls, it does.

So on Valentine's Day, while at a local restaurant, The Youngest Urchin (who is now six) and I had the following conversation while jammed in the bathroom stall together:

me- Yeah, I know. Your sister couldn't stand them when she was just learning to go.

Y.U. They always flush when you don't want them to.

me- I guess they do when you're small.

Y.U. *contemplative silence* I wish toilets could read your mind. Then they could know when you wanted them to flush.

me- Hmm. I don't think I'd like a toilet to know what I was thinking. That would creep me out. (*Major interior struggle to keep in the dirty mind/toilet joke*)

Y.U. *somewhat exasperated at my limited vision* Well you'd only tell it to flush.

me- Yeah, but it'd still be in my head. I'm not crazy about that. What if you used The Force instead?

Y.U. Yes! The Force! That way it would flush only when you told it to. That's what I said.

me- Oh. Okay. Then I guess I'm fine with using The Force to flush.

The person in the next stall came out at the same time we did. She washed her hands pretty quickly and didn't make any eye contact at all, then scurried out of there. Not sure why. As Urchin Bathroom Conversations (c) go, that one was pretty amusing.
Posted by Ava Quinn at 3:28 PM 26 comments:

Please don't give me your baby to hold so you can help your child with her Valentine project during the party, come back ten minutes later and tell me said baby has a fever and a rash that you think *might* be chicken pox. You know, better yet? Don't bring the baby to a party full of sugared up three year olds at all and expose them to any of it.

If you do that again, I'm going to raise your child's tuition to cover the costs of installing a decontamination shower just inside the door of my home.

Man, do three year olds know how to party hard. Apparently to them a party isn't a success unless you've gotten icing up to your elbows, a kickin' juice mustache, and paste in your hair. Anything beyond that is bonus.

As you can tell, the parties are planned and run by the parents. So then why am I exhausted? I'm supposed to be writing now since we're going to be buried in a foot and a half of snow by tomorrow. No writing gets done on snow days over here at Casa de Quinn (or Chez Quinn for all my French Canadian silent lurkers).

So as I type, I'm taking a page out of the three year olds' book and juicing up on caffeine. If only I could get a sweet juice mustache going, I know it would make all the difference.

Hope you're getting lots of words on the page, or whatever it is that you love to do- done.

Until next time, Citizens.
Posted by Ava Quinn at 1:38 PM 12 comments:

Labels: a peek inside, crazy musings, my evil streak, writing

ALS is a horrible, cruel, crushing disease. For two years I watched as it eroded my good friend day by day, and the experience changed me. The loss of this creative, vibrant woman has hurt me in ways I've never been hurt before.

At her memorial, as I walked around the displays of her artwork, calligraphy and photography, I saw the woman I knew. As I looked at pictures from her life, we remembered the woman that she was. But I found out some things that I hadn't known before as well. For instance, she could sing like Janice Joplin and would rattle the windows with her rendition of Another Piece of My Heart.

There's always more, isn't there, to friends? Something that never comes up in conversation. Something they only show to certain people.

The Youngest Urchin, who is six, hasn't taken my friend's death well. She's become more clingy and has anxiety now about me dying. Which is hard for me to take. I've talked with her, but this is her first experience with the death of a person she knew. So we're stumbling our way through together.

For now, I'll send us all off with Janis.

Are there things mourners would find surprising about you at your memorial? Would you want to change that?

One Last Re-Run To Get Me On My Feet

Last Wednesday, my very good friend died of a terrible, wasting disease, ALS. Her funeral was yesterday, and I'm still trying to come to grips with the terrible loss of such a wonderful person.

So between that and the snow day today, I needed another re-run. So here it is. The first of the Polka Apocalypse entries from back in February of 2012. The apocalypse ran through March of that year and into April. I'll have a serious entry after that for my friend, but then hopefully I'll be able to drag myself up out of the pit I've been in and resume some of the zaniness this place is known for. So without further ado, I give you this.

Remember that polka intervention I had last year for my parents? Well, it turns out that I ticked off some pretty scary people. Apparently there is an underground organization out of Europe who took offense to some of my comments.

And now they've found me.

The terrorizing began innocently enough. Just a random polka heard from a passing car now and then. I started to get suspicious when a schnitzel truck began driving by Chez Quinn at regular intervals. Then they started coming en masse, blasting their polkas and *shudder* yodeling.

I got some footage of them. Keep an eye on that red car, because he's out of control.

But they aren't the only ones part of an underground organization. The Gnome Defense League leaves gno Gnome behind. So I started calling in some favors from my wet work days with them. And they stepped up. In spades.

First to show up was Ivan The Enforcer. Known for his Kneecap Knockout. 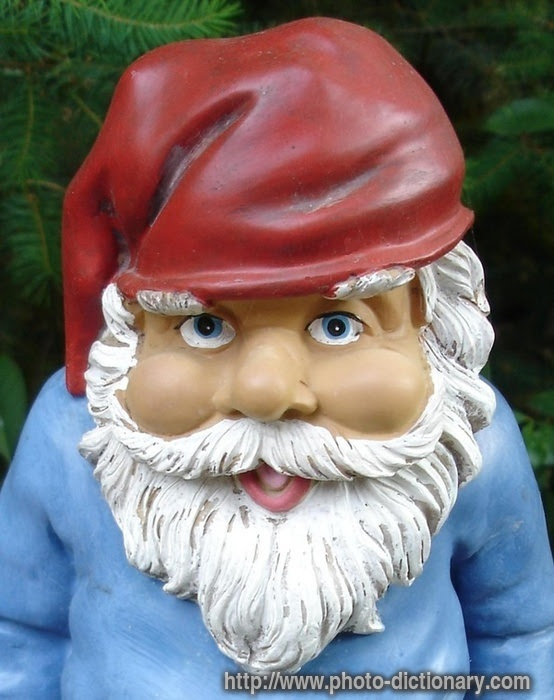 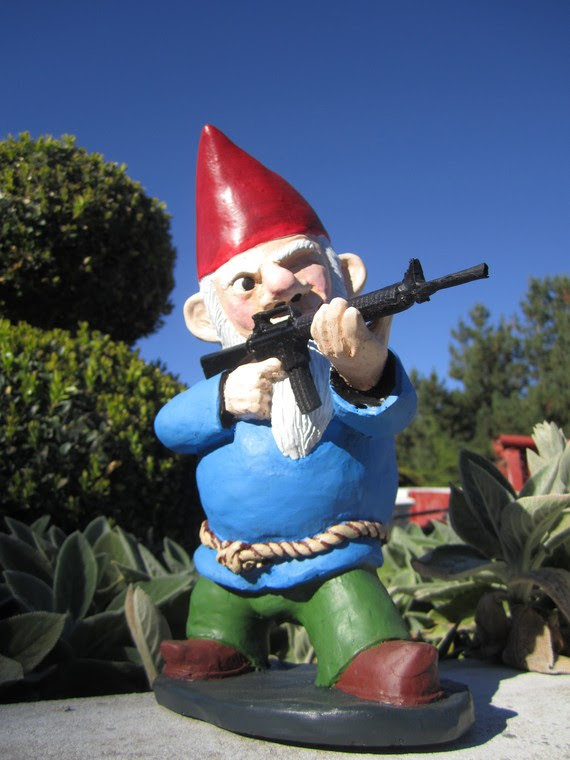 The rest of the crew hasn't arrived yet, but they've assured me through the Gnome Underground Network (G.U.N.) that reinforcements are on the way.

As for now, I'm keeping a low profile since we're still outnumbered. I've been warned they may try to take over here at Tongue in Cheek remotely, but the blog is sacred. That would mean all out war. I'm sure they don't want that.

My sources are still putting out feelers to find out their agenda. But it won't be long.

Power to the Gnomes, Citizens!
Posted by Ava Quinn at 8:57 PM 10 comments: