Happy New Year, everyone! Sorry I haven't been around on the interwebs as much as usual. The culmination of a year's worth of meetings presided over by those iron-fisted, yet extremely rambly blue haired old ladies is finally coming to fruition tonight. Yes, the ginormous breeches are dropping.

I've been running around getting ready for the kids crafts I'll be running for the night and picking up last minute items for the committee. Because the big drop is tonight!

The Urchins are predictably and massively whipped up. I'm trying to channel all that excitement into thank you cards. Somehow there doesn't seem to be a good translation from UBER EXCITING FUN WAAAAAY PAST OUR NORMAL BEDTIME!!! to sit and with grateful heart, thank your Great Great Aunt Emily for the check she sent you. Go figure.

Anywho, I tweeted earlier this week while I was slaving away at Staples prepping one of the crafts for tonight, and I thought I'd share. 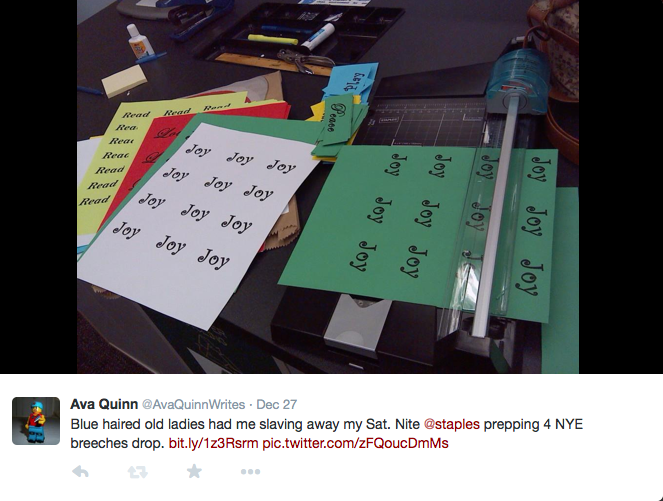 Pictured above are one-word resolutions and wishes for the new year. The writer in me really liked the idea of choosing one word to describe goals and wishes for the entire year. It cuts down the extraneous distractions that get me every time (ooh! Is that a chicken over there?) to a laser sharp idea.

It's not a replacement for definable goals, but more like a mantra or billboard reminder of what it is you truly want to accomplish.

Labels: a peek inside, inspiration, writing

I hope you all enjoy your holiday. The Urchins are on the best behavior they can muster, which isn't much. The Man is still in present wrapping mode, and I'm desperately trying to get the cookies and food ready. I need something to get me through. I know just what will help. And it's not 80 proof.

So to make your holiday even merrier, enjoy my favorite Elvis Christmas song.

Have a fantastic, fun-filled and peaceful Christmas.

See you soon for the Tongue In Cheek year in review.

Until next time, Citizens!
Posted by Ava Quinn at 11:01 AM 9 comments:

Labels: a peek inside, inspiration, music

Is there some holiday coming up soon? Every once in a while as I come up for air I hear something about it. I know for a fact that The Urchins want in on it. Just can't put my finger on what it is...

I've been a bit distracted lately. The blue-haired old ladies have commandeered much of my spare time. I'm sure I've mentioned once or twice that little old ladies are my personal Kryptonite. These particular ones run long, rambly meetings and send me all over town on errands for the New Year's Eve Drop they do for the community each year. (They drop pants from a flagpole. I kid you not.) I'm in charge of children's crafts and games, among other things.

I've also been playing the "Where's My Spy Camera Game" for the past month.

Refreshing my email every twenty-seven seconds to see if the people who requested my manuscript have rejected me yet has my nerves frazzled. It hasn't done much good for my sleeping habits either.

Most of my writing efforts have been used up on refraining myself from re-editing the manuscript I submitted. That's been an effort of Herculean proportions. So I've been focusing on how to improve my query letter for when the rejections come. I'm not pleased with the second paragraph describing Ethan. It seems choppy, but I've looked at it too many times to make improvements. Though I wouldn't be adverse to suggestions in the comments. ;)

Sheriff Ethan Bankert doesn’t have time for a woman. But the beautiful hustler picked the wrong men to con. He should know—they’re the main suspects in his father’s murder. A case that’s gone cold. Whether she wants to believe him or not, tangling with them has painted a bulls-eye on her back. Now, with Sheridan under his roof, protective custody takes on a whole new meaning. If he could just convince her to press charges, not only could he keep her safe, it would be the opening he’s been looking for to continue his investigation.

As their nights heat up, Sheridan’s walls of distrust start to crumble, but this sexy-as-sin sheriff still won’t convince her to step foot in a courtroom again. Not after the humiliation she went through there as a child. The road is calling as her last big score nears. Never mind that since she stumbled into this town her deepest dreams have grown to encompass a life with Ethan.

But their future is jeopardized by the same threat that ended his father’s life. Only this time, it’s Sheridan in the crosshairs.

A SHOT AT FOREVER is a 97,000 word adult contemporary romance, and the first stand-alone book in my series of Hard To Tame Heroines set in small town Texas. I am a member of RWA and the former (2013) president of my local chapter. A SHOT AT FOREVER was a finalist in the 2013 Sheila Contest held by the Valley Forge Romance Writers.


~~*~~
Present shopping and wrapping, Christmas play practices, not to mention the frightening levels of Christmas-crazy enveloping the three year olds I teach have all taken their toll. I'm frazzled and jittery and a donkey on the edge.

So as this wonderful holiday approaches at warp factor 8, I hope you all have the opportunity to enjoy your time. Don't be like me and let the outside world avalanche down around your ears.

Wishing you all peace and happiness and