What Memorial Day weekend is complete without a barbecue? And as your reigning 'Possum Queen, I'd be remiss in my duties if I didn't remind y'all about the interesting and economical choice of 'possum for your grill!

Here's the "before" version - 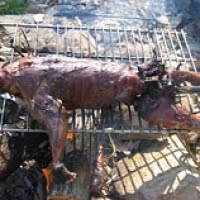 Don't forget to stock up on all those yummy 'possum sauces and things. I'm sure your local grocer has plenty of these on the shelf for this holiday weekend.

So, to make this Memorial Day unforgettable, run right out and get a mess of 'possum - the third white meat, sorta*.

From Krass to Class

Okay, okay, stop calling in. (That means you, mother.) I'll move on from those Krass Bros. commercials. (But they really did explain a lot. Amiright?)

So in an attempt to purge the memory of those commercials from your brain without poking your eyes out, here is a wonderful song that Ray Charles covered titled You Don't Know Me. It's such a beautiful, emotional song. One of my favorites that he's ever recorded. Here is an early live rendition.

Enjoy. And please accept my humblest apologies if I inflicted any lasting damage due to your viewing the Krass Bros. spots.

Well, This Explains Some Of It

When I was a kid growing up just outside of Philly, I loved these commercials. I still do. They're hilarious.

(The hair is definitely typical of the area in the eighties!)

Labels: 80's reunion, a peek inside, nonsense, showing my age

Back From Retreat With Goldfish Emergencies

My writing retreat was awesome. The new place is fantastic. Getting together with my writers group for three consecutive days was absolutely phenomenal. Three days of writing and eating and laughing and eating and writing and laughing some more. Though, the fifteen fire trucks that came the first night for the industrial dryer fire was not so fun.

I was able to complete my writing goal and talk to friends. It always astounds me how amazing it feels to be with like-minded insane people. There's quite a comfort in that.

So whilst I was away, The Man had a good time with the urchins. On Friday night, they attended the eldest urchin's school May Fair. And yes, carny goldfish were obtained. Over a hundred dollars later to outfit the two dollar slimy things, and one has the gall to up and die last night.

Our neighbors, wonderful people that they are, didn't blast my head off with a shotgun when I knocked on their door at 10:30 at night to ask for a bucket of water. Seems our water is too hard and has raised the ph of the tank to intolerable limits. They were all asleep, but her father-in-law was still up. So here I come, tromping through the rain, up to the back door in my pajamas, garden clogs and a rain poncho to ask for a bucket of water because they have a water treatment system installed.

As I'm filling said bucket, he proceeds to give me the down-and-dirty-nitty-gritty of her side of the family. He must have spilled every family secret they had in the time it took to fill up a bucket. Apparently I have one of those faces. You know the one, the "let me tell you every embarrassing thing that's ever happened to our family now that I've known you for 45 seconds" face.

It was all, this daughter died in a car crash and we buried her on her graduation day, and this son-in-law cheated on this daughter and ran off to Kentucky, and I had my gallbladder out and the little wife had her lady parts removed. And the whole time I nodded and made concerned noises at the appropriate times, all the while thinking - For the love of all things holy will you fill faster!!

And after all that I endured, the little fish bastard went and died anyway.

So then there was the morning after fall-out with the urchins. They have been so excited about the fish. Everyone within a sixty mile blast radius has heard about getting these fish. I cringe every time I take them to the store because each and every unsuspecting clerk gets to hear the tale as they scan our items at a faster and faster rate of speed.

So the dang thing died. There was much gnashing of teeth and renting of garments that morning. I was severely chastised by the oldest urchin for its impromptu burial at sea (I now know how Obama feels). Explicit instructions were given on how I must find a mini coffin to lay the fish to rest in as well as schedule a family viewing instead of a watery burial in an undisclosed location.

And I know these little cretins disguised as harmless fish are in league with the sea monkeys. Their tank has clouded up in under an hour. You know what this means. The sea monkeys have already infiltrated. Mark my words.

The Man just shakes his head and adds chemicals. But I know. It's a portent of watery sea monkey doom if ever I saw one.

So, if you haven't already guessed, this post, which I began at eight a.m. and am finishing now at 9:15 p.m. is the only writing I've gotten done since getting home from retreat.

How was your weekend?
Posted by Ava Quinn at 9:17 PM No comments:

Sing with me!! It's the most wonderful time of the year!

No, not Christmas. Or back to school.

It's time for my writer group's annual writing retreat! We have a new venue this year in a galaxy far, far away. Okay, it's Pittsburgh. (But really, same thing as far as I'm concerned.) And therefore, I have no idea what to pack. Will it be cold or warm? (Tauntuan or Hoth?) Will I want comfy sweat pants or get-down-to-business jeans? Will the weather be nice enough to go write outside? Will I need a sweater? Will there be Sand People to battle? The possibilities are endless.

One thing is out of the over-packing equation, though. We won't be going out for drinks, so I won't need to pack anything for that. But, that outing was replaced by an inning. A pajama clad cocktail hour. If only I had Hugh-Hefner-like pj's, I would rock that thing. But alas, I have flannel.

But the wardrobe is not the sing-along-with-me-roof-bustin' exciting part. I get to go for three days and just

Yes, you read me correctly. Write. It's an all meals provided, no urchin taxiing, sea monkey battle-free zone. All I have to do is show up and write my little heart out. And paint my nails. (That's usually my major goal of the weekend, anything over and above that is gravy.)

So, any big plans coming up for you? Have you ever gone on a retreat? Do you suffer from the same over-packing affliction as I do? Tell all. Operators are standing by to answer your comments. Thanks, and have a nice day!
Posted by Ava Quinn at 8:37 AM 4 comments:

To The Roller Derby!

I may be taking my next field trip tonight. Where to? Why, the roller derby, of course.

The Harrisburg Area Roller Derby (or H.A.R.D.) is having their recruitment night this evening.

Now who to try out for? The Nuclear Knockouts? The Fallout Femmes? I think I may be leaning towards the Atomic City Rollergirls. Mainly because their colors match my motorcycle. 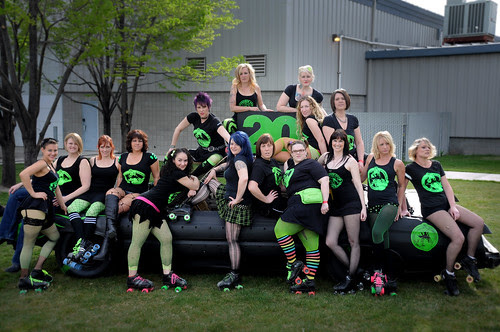 Roller derby - not to be confused with Rollerball, which used motorcycles, so you know I had to be interested in that too.

I have to admit, I didn't know much about roller derby before a few days ago. So, what was an ill-informed twenty-first century gnome to do? Duh. Wikipedia! (You thought it'd be a trick question, didn't you?) Anyway, here's what wiki has to say:

Contemporary roller derby is an American-invented contact sport with roots in sports entertainment. The game is based on formation roller skating around an oval track by two teams. Points are scored when the designated scoring player (the "jammer") of a given team laps members of the opposing team;[1] hence offense and defense typically occur simultaneously.

So the jammer gets flung forward around the track, trying to get past the opposing team as they block and try to get their jammer past first.

These gals have spunk, style and stamina. What's not to like? I just hope they'll give me a tryout, even though I'm only three foot nine (with the pointy hat).