I may have mentioned a time or two that I have a huge geek streak in me. (Right next to the evil one.) I adore the stop-motion work of Ray Harryhausen. Clash of the Titans was an all time favorite of my youth.

So for your Halloween delight, I found a tribute video on You Tube that showcases his fantastical creations. Here is a full list with pictures of all his creations from Harryhausen.com.

And here they are in their full stop motion glory. Enjoy and Happy Halloween!

Labels: a peek inside, my evil streak

Why Can't I Have A Squirrel Like This In My Yard?

Squirrel got his head stuck in a Halloween decoration.. - Imgur

It's Been A Helluva Month

So my mother left at 5:45 this morning. She's been in from Montana for the last three weeks. But only this last week was she ensconced at Chez Quinn.

I love my mother. Like Christmas and taxes, she comes but once a year. And her visits are the emotional equivalent of a bungee jump. The jerking of emotions from highs to lows and back again are one of the universe's mysteries revealed in great detail as it's played out in my house.

On top of that, the youngest urchin was home sick today, so writing could not resume after a week of forced respite while visiting with my mom.

So many times after a visit I go into isolationism mode to recover. I even have a category for that on the sidebar to the right. I'm hoping to skip the crazed over-analyzing and dreariness that follows such visits by plunging into the w.i.p. again. Though that can be dangerous territory. I can take left turns in my writing and seriously torture my characters in some sort of twisted effigy of self preservation that will take weeks of rewrites to repair.

Maybe I'll just take up a new hobby. (No, not knitting tank cozies.) Something more sensible. 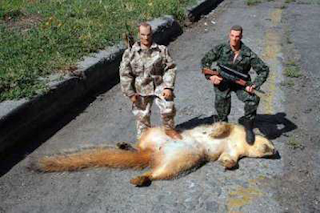 I really think it's the up and coming new thing.

Until next time, citizens. Unless I succumb to the isolation booth. Then who knows when I'll return.
Posted by Ava Quinn at 8:49 PM 5 comments:


Too much to explain now. Will catch up soon.

You pull a muscle as you attempt to hook your sports bra. I mean, I hadn't even made it to Zumba class and I'm already injured? What the hell?!

The only thing worse is as I get older, I find that I go to bed feeling okay, but wake up with a pulled hammy. And I didn't do anything during the night in the bed to sustain an injury. I'm just old! How do I go to bed fine and then wake up injured? What is that about?

I blame the sea monkeys.

Well, I still went to my Zumba class. Not the one I last reported on. You remember, the one I wanted to stage a coup and take over. Hostil-y. A la Joan of Arc in Bill and Ted's Excellent Adventure. I now attend Zumba at the roller rink. Yes, the roller rink! It's so awesome. They turn down the house lights and get the disco globe going and the colored party lights. I'm hooked.

So I didn't injure myself further, though this has been the week of injuries/frailties for me. I had that ear infection, I banged my head wicked hard (it's still tender) on the corner of the door jam of my kitchen,(the man still thinks I may have slightly concussed myself) and now the sports-bra-hooking injury. It reminds me of the time I almost killed myself due to deeply ingrained girly tendencies.

So are there any weird things happening to you as you get older? (Why do I have the feeling it's just me.)
Posted by Ava Quinn at 9:05 PM 6 comments: