January
I exposed my Wii addiction and revealed my super villain plans, trying to convert the Sea Monkey colony who lives in my tub to become my minions and deliver my wrath. I worked on those Sea Monkeys all year, and dangit they're still holding out. I also polled the TiC audience about bad boys vs nice guys.

February
We got a buttload of snow, I wrote a bit and continued to hone my super villain plans. Costumes were voted on and negotiations continued with the Sea Monkeys in order for them to agree in helping me to deliver my wrath.

March
March brought more super villain planning, and an attempt to lure different minions to serve me. A Ukelele theme song was discussed. Casa de Quinn went to DC to see the Terracotta Warriors and The Man and I went to see La Boheme. I revealed my love of Rube Goldberg machines and had a very close call with becoming a chrysalis. A VERY close call. I rounded out the month with a story about karaoke in the pokey.

April
I had a stink bug perched on my tooth brush one early April morning. My father was admitted to the hospital and I gave my Kick Ass Heroine presentation to the Valley Forge Romance Writers. (No actual asses were kicked in the presenting of this program.) And I discovered the process of corset piercing. Could have done without that last one.

May
I had to conduct a long distance polka intervention on my parents' behalf. (No one thinks it can happen to them, but the horrors of the polka really do exist.) And I went to my chapter's writing retreat! Yay!

June
I extolled the merits of the mullet, and had a jelly bean and Taco Bell induced epiphany late one evening.

July
I wore my farmer tan with pride to the beach and admitted that I'm somewhat technologically deficient (and i like it that way).

August
Secret confession IV - I love me some rummage. And I believe there's a lid for every pot.

September
I blogged about Sasquatch shanghis and computer technical difficulties.

October
We lost our little border collie, Sadie and got the flu. I also wrote a very strongly worded letter to the squirrel residing in our barn.

December
And finally, December. I shared my theory on why zombie stinkbugs are living in the sewers. I wanted to make ninjabread men for Christmas and put the motorcycle away for the winter.

There it is in a really big nutshell. We'll see what type of nuttiness busts out of 2011's shell. See you next year!
~A
Posted by Ava Quinn at 1:50 PM 4 comments:

Hope you had a great holiday!
Posted by Ava Quinn at 9:35 PM 2 comments:

I've been playing this game for a few days now.

It's crazy. As a bungeeing yard gnome - see, it was made for me- you have to fend off elves and santas arriving in sleighs, with a brick. Plus you can call in air strikes. Oooh! Ooooh! And you can create a brickopacolypse by exploding all the bricks off your moving building. Just don't let those damn elves get to your chimney or it's all over.

Saturday night, I snuck out of the security compound, known as Chez Quinn, and saw a band called Seasons. They were very good. They brought a bunch of friends with them, including an excellent singer, Mary Callahan. She sang this song called Snowfall. Her voice is very similar to the singer performing it on yotube, though I thought Mary's was a little better.

I love the imagery in this song. I also love how snow isn't really something you'd compare to love. But it works for me. Hope you enjoy it.
Posted by Ava Quinn at 6:37 AM No comments:

I Wanna Make These

I want to make Ninjabread men. Decorate a gingerbread house where they're launching an assault with ninjabread throwing stars.

Can you tell where my holiday spirit-o-meter is pointing?

Hope yours if fuller than mine!
Posted by Ava Quinn at 11:19 AM 4 comments:

It's Been Quite A Fall

Season, that is. Fall has been tough over here at Chez Quinn. From September to now, both of the Urchins have been very ill. Ill as in the doctor's office that never prescribes antibiotics did for both. More than once. The three year old urchin was on them twice in as many months. The six year old urchin is finishing up her third round of them. And they're still not 100%. *sigh*

The Oldest Urchin has been having a very rough time of it. She saw a specialist twice this month and is finally showing some signs of improvement. She's a trooper. (I've been pretty worried, to tell the truth.) The long term sickness has doubled my laundry, and I've napalmed the house three times from top to bottom. Which takes days of scrubbing and gassing.

The sea monkey tribe fought valiantly, but I have definitely reduced their numbers in the scouring frenzy. I anticipate a retaliatory attack any day now.

There have been meetings and school runs and school volunteering and cleaning and doctor's visits and pharmacy runs and more meetings with the blue hairs and a dog dying and sick days and a funeral and the general all around craziness of Thanksgiving and Christmas. There's lots more, but you get it.

So amidst all the craziness and running around and mothering, I haven't done much writing. Late in the summer I had resolved to finish Brass In Pocket before RWA National, but things have changed. I've decided for monetary reasons that I won't be going to National this year.

I also let myself off the hook on Brass. I haven't had the energy or time to do much writing and I was forcing myself to open that WIP. So I decided I'd start something new, figuring that writing is better than not writing. Right?

So all my grand ideas of upping my game in regards to writing have gone down the drain. How do you keep writing through the chaos? Especially when you don't have deadlines chasing you down like the hounds of hell? Being unpublished allows me to set it aside. A little too easily.

So I need more resolve, I guess. I have guilt -in spades- but that's not giving me the follow through.

How do you find the time and energy to write through the chaos?
Posted by Ava Quinn at 11:06 AM 4 comments:

Stinkbugs In The Sewer

So I was thinking. One of my more dangerous past times, I know. And had a terrifying epiphany of sorts.

As I gingerly carried yet another tissue enshrouded stinkbug to its watery grave via the toilet, it hit me. This has to be the primary way most people dispose of stinkbugs. You can't squash them, or you'll be engulfed in an unholy smell that may just be a sentient being in its own right. So you capture them and flush them alive.

Down to the sewer.

This practice may have unwittingly created a situation rife with apocalyptic potentiality.


Except stinkbugs are swarmers. My brain keeps terrifying me with images of crazed mutant stinkbugs hopped up on toxic sewer gasses, rampaging across cities in devouring hordes - scarab beetle style a la The Mummy.

But I can't come up with a different disposal system. What shall we do? How can we stop adding more numbers to their growing sewer army without unleashing a scent clearly from the bowels of Hell?

I'm stumped. The comments are open for your suggestions.
Posted by Ava Quinn at 2:19 PM 7 comments:

And sometimes when you're a woman, too.
Posted by Ava Quinn at 10:40 PM No comments:

A Moment of Silence, Please

Now that it is the beginning of December, I must admit that it's time to winterize and hibernate the motorcycle. *sigh* 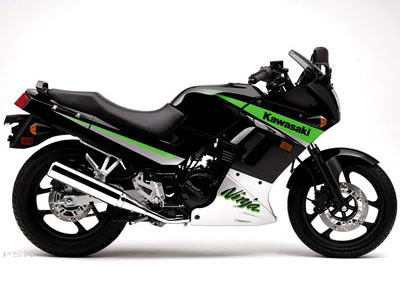 I'll miss you like crazy little Ninja.
Until springtime. Then it's back in the saddle and speeding down the back roads. Here's hoping I can wait that long.
Posted by Ava Quinn at 12:50 PM 4 comments: