What The Fuck, Universe?

So, I'm home for a quick shower before I go back to the hospital. I've been at the local hospital since yesterday morning when we took the oldest Urchin into the ER and she got an emergency appendectomy. There have been complications from the start, including she had an asthma attack on the operating table and again coming out of the anesthesia. They had to do the operation old school, and it turned out to be very invasive. She's been running a fever for days, even though she was on antibiotic before she went to the ER for the damn deer tick last Monday and on an IV drip of antibiotics since coming out of surgery. Hasn't she had enough, Universe? Leave her the hell alone!

All I can say is thank God I didn't fly to Montana for my dad's heart attack.
Posted by Ava Quinn at 4:02 PM 2 comments:

I was going to do a post today about my long,  torrid and completely one-sided love affair with Bruce Campbell . . .

But that will have to wait for a while. I found out yesterday that my father had some sort of a heart attack and is in the hospital, so I will probably not be around the internets for a while. I'll be checking in on all those great blogs that I read at a later date, and will be scheduling some re-runs for the time being. I don't think I'll be flying out to Montana, but I don't know what the full situation is yet.

So enjoy the Tongue In Cheek zaniness from the past, starting with last year's Memorial Day celebration - 'Possum Queen style.

I can't believe May is almost over. I have been running around like a chicken with its head cut off the entire month, and June doesn't look like it's shaping up to be any better.

I got back on Sunday from paradise. No, not some tropical island. What lowly garden gnome would have the money for that? I mean my writer's group annual retreat. Three days of nothing but writing and eating and kibitzing and writing some more. All where they feed you and there's no monster laundry pile hiding behind every corner ready to pounce on you when you innocently walk by. (I think that may be my favorite part about the whole thing.)

I got lots of editing done, talked and ate with good friends and mentally recharged as a writer. But as soon as I walked through the door at Chez Quinn, all that came to a screeching halt.

One of the things that ground everything to a standstill was I found a deer tick on the oldest urchin. Those of you who've hung around here for a while know what that did to me. So yesterday morning was taken up entirely with the doctor and pharmacy before dropping her off at school at lunch time.

My scheduled is jam packed until at least the middle of June, but I really want to try and keep my momentum going. So far the magic eight ball has decreed that, "outlook doesn't look good". (stupid, frickin' magic eight ball) But I continue to believe that I will prevail. We'll see how long that lasts.

So what gloriousness and/or madness is going on in your neck of the woods?
Posted by Ava Quinn at 9:48 AM 8 comments:

The BFF Has Gone Mad

Mad I tell you! It's usually me who makes crazy, delusional statements and then follows through on them. And it's the BFF who tries to talk me out of it. But now - now she's the one insisting on insanity.

We'll both be celebrating a milestone birthday next month. You know the one. The "old enough to know better but think you're young enough to survive whatever hare-brained notion you come up with to prove that you're not".

So, a new country bar opened in our redneck of the woods. (Yes this is related. Just wait.) And in this hillbilly honkytonk, there is a -wait for it- mechanical bull.

Yes, the BFF wants us to go ride a mechanical bull for our big milestone birthday celebration. She is refusing to grow old with dignity. I just want to be able to grow old period. Which is why I am balking at this particular half-baked plan. But she's sticking to her guns, bringing up the many times where I talked her into doing something stupid. Or dangerous. Or stupidly dangerous. Such as:

The Infamous Occurrence of the Hot Tub Party.
The Riding in the Back of the Pick Up Down the Highway Double Date Disaster
The Pilfering of the Flashing Construction Sign
The Pool Sharking at the Dance Club
The Tag-Team Mud Wrestling (You can totally take her, Cat. You're wiry.)
The Under-aged in a Country Bar Incident (though, to be fair, it was HER mom that got us in.)
The Trapped in the Camaro Doing Doughnuts in the Schoolyard Debacle

The list goes on. And on. So as you can see, I may just have to get my ass up on a mechanical bull in restitution. If you ask the BFF this is already a done deal.

So I'm praying she either comes to her senses, which is unlikely. Or the mechanical bull  has a setting level of Shetland pony. I have a feeling I'm screwed on both accounts.

Did you ever do anything wild for a birthday, or just in the craziness of youth? Lay it on me!

Labels: a peek inside, showing my age

I Wanna Be Fiona

When I grow up. 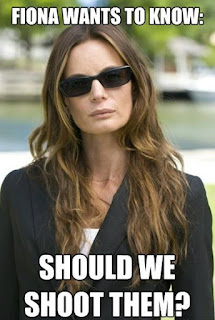 Yes, I went to the roller derby. And yes, it was as awesome as one would expect. Doubling the excellence of the experience, the bff and I hit Neato Burrito before the bout. (Man, I need to write a sonnet praising Neato Burrito. I keep threatening to do that. One day I'll follow through.)

We went in knowing next to nothing about roller derby. And the learning curve is great. There's a lot of strategy, a dump load of officials and many different calls to know. We did pretty well faking our way through it, thanks to the brief crash course in roller derby rules provided in the program. 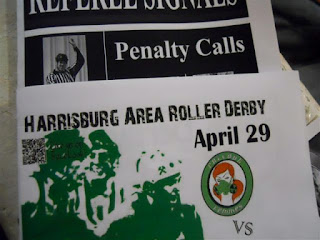 The players were hard core, there was a live rock band at half time, and a lot of all around good fun. I have a healthy dose of respect for the players, even though they have sometimes hilarious names. My favorite name from the Charlottesville Derby Dames was Nilla WasteHer. Our fearless home team had some great nom de plumes too. Such as: Mystery Violence Theater, Donita B. Hostel, and Anida Blade. (Even the officials had game names like Ted Nuisance.) Each player has to come up with their very own derby name, and register it with the national roller derby registry.

The bff decided that I needed a roller derby name, and I agree. But not on the name she came up with for me, which was Pound Cake. I forgive her though, because look what she bought for me!!!!!

My very own Fallout Femmes tee shirt! I want to hug it and squeeze it and pet it and call it George. It matches my motorcycle and I will wear it to my writers' retreat this month with pride. Sigh, I am loved.

So, as I revel in the warm afterglow of a fantastic field trip, I shall endeavor to come up with my very own roller derby name. It might need to deal with motorcycles or gnomes or maybe evil polka. That would definitely strike fear into the heart of any opponent I may roll over.

So what would your roller derby name be?
Posted by Ava Quinn at 10:04 PM 4 comments: