Hi everybody! At this point right now, I wish I were still kidnapped by carny folk. It'd definitely be easier being the bearded lady than what's going on at Casa de Quinn at the moment. Which is why I'm so late to THIS party!

The fabulous Melissa Maygrove has brought us Follow Fest again!! She's so awesome. So in the tiny moments of sanity, which were few and very far between, I pulled together my post. Be sure to click on the graphic below and see all the awesome participants. 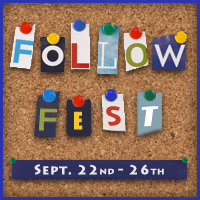 Blog button designed by Carrie Butler.
Name: Ava Quinn
Fiction or nonfiction? Fiction
What genres do you write? Romance, baby! Contemporary Western.
Are you published? Not yet.
Do you do anything in addition to writing?
I'm the web mistress and children's game and crafts coordinator for our township's New Year's Eve drop where they drop their pants. Yes, five foot tall yellow breeches. From a huge flag pole. I kid you not.
Tell us a little about yourself.
Last year I said I mommed. Which I still do. (Yes, momming is a verb.) I now also teach preschool (3 year olds) part time and write whenever I can. I blog about crazy nonsense that goes on in my world. (Polkappocalypse, anyone?) I recently escaped from evil kidnapping carny folk. I love roller derby, the hermetically sealed environs of my happy place and riding my motorcycle.

What are you reading right now? I'm doing a bunch of "the craft of writing" related reading and just finished up a critique for a friend.

Which authors influenced you the most? The authors from my local writing group: Delynn Royer, Natalie Damschroder, Susan Gourley, and Misty Simon.They've been so generous with their time.
Where can people connect with you?
Blog
Right here at Tongue In Cheek readavaquinn.blogspot.com
Twitter @AvaQuinnWrites
Facebook- Still not on Facebook. Am I the only one left on the planet not on there?
Goodreads Ava Quinn
Google+ Ava Quinn
LinkedIn Ava Quinn
Sick of seeing my name yet?


Is there anything else you’d like us to know?
I have a crazy author interview, complete with a Sea Monkey SAT portion. So hit me up if you're promoting! Thanks for stopping by and checking out all my crazy. Sorry if I got any on you. If I did, it was completely accidental.
Posted by Ava Quinn at 9:04 AM 35 comments:

When We Last Left Our Intrepid Heroine...

She was escaping from crazed kidnapping carny folk. (As such) Okay, that's not quite the truth.

What is the truth is that life around here at Chez Quinn has been hectic to say the least.

The BFF is getting married Saturday, and the Urchins and I are all in it. Youngest Urchin is in freakout mode. She cannot do the wedding walk and toss petals at the same time. So now it's become this huge psychotic psychological block. Which I have done every good mom thing there is to assuage her fears, and now it's just funny. My girl apparently can't walk and chew bubble gum.  I have not informed the bride. Waiting to see how it pans out on Saturday. Hilarity will, I'm sure, ensue.

My mother-in-law had her cancer surgery, and it looks like no radiation treatment will be necessary. Hooray!

My father-in-law has finally gotten over his month long pneumonia, but it put his heart back into atrial fibrillation. He had his heart converted with the paddles of life/AED last week. Receiving an electro shock while awake. This is the 6th time they've had to do it. He's still recovering, but his heart is back in rhythm.

Back to school has been bumpier than usual. The three year olds are still crying. My job is now officially called Snot Sweat and Tears. Decontamination showers will be installed outside the door to my house  shortly.

Youngest Urchin is having her back to school separation issues, which twists the knife in me but good as they say.

Oldest Urchin loves school but has enormous amounts of homework and wants to start playing an instrument.

Lots of other goings on have been taking over my life, but I've bored you enough already. Time to dive back into the crazy.

And here it is.

While camping for two weeks this summer, at our first stop, I found an example of the importance of the proper use of commas. This sign was posted at the first campground we stayed in.

Were all the adults of the campground deemed "slow"? Or was there a subset of adults in the slow group? Did they drive the short campers? And most importantly, was I included in the description of slow adults? I refused to believe my mental capacities should be called into question, especially after I discovered something even more significant than the improper exclusion of a comma.

This pole, with its insulting sign, is secretly a portal to hell. Why? Because it smelled like goat. Yes. Goat. And no I didn't sniff the pole. It emanated goat smell. And as anyone who has watched the episode Red Rum from The Mentalist knows, Cho, my favorite character, has declared goats are of the devil. And I believe him. (I can't find that particular clip anywhere on the web, so here's a different equally funny Cho clip. Just pretend it's the other one.)

Anywho, back to the pole. We had to pass it on our walk to the pool. And every time I came near it, there was the smell of a thousand goats. But the horrific stench wasn't everywhere, like when a skunk gets flattened on the roadside. No, this was in one specific spot. Two steps in any direction from said spot, and the smell...disappeared.

Me walking, stops. To the Man: What is that smell?

The Man: What smell?

Me: The one that smells like the insides of a hundred goats in the middle of the desert.

The Man, gives me the look he saves for when he really thinks I've gone off reservation: Yeah, I don't smell anything.

Me: Come here. I'll watch the girls. Just stand right here and tell me that stench wouldn't knock a buzzard off a shit wagon.

The Man, vaguely standing in spot in middle of road where I placed him: That's Epoxy or something.

Me: You are so wrong.

The Man staunchly refused to recognize the imminent peril our family was in and instead made his way blithely with the Urchins to the pool. But I knew. I knew there was evil emanating from that pole. It was only because of the constant vigilance on my part that we weren't sucked down into the bowels of Hell every time we passed that bad boy. And thus we were able to continue our vacation as I, the unsung hero, herded the young 'uns past that pole with all due haste.

So to my family I say, "You're welcome."

And since we survived the devil's telephone pole, I was able to go on and have other crazed camping adventures which I will reveal in my next post.

Until next time, Citizens! Stay away from goat reeking devil poles!