A severely appalling lack of chocolate in my house. This must be rectified. STAT!
Posted by Ava Quinn at 9:22 PM 2 comments:

The Reign Is Done

Yes, I've been coming to grips with the end of my year long reign as the County 'Possum Queen and therefore my spokes-queen status for the Canned Pot Bellied Processed 'Possum Products Company.

It was a beautiful run, laced with all the canned and processed opossum I could eat or store for later. 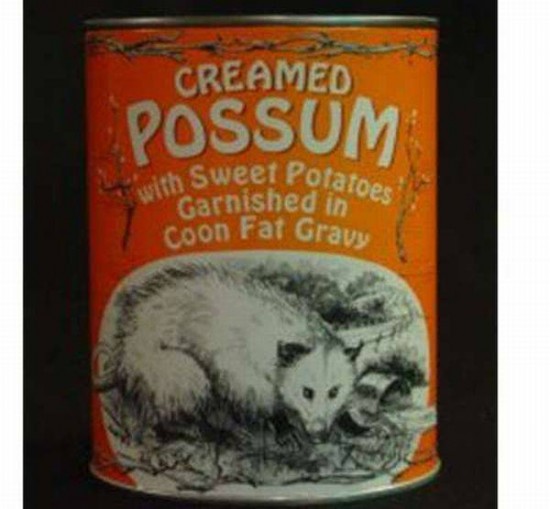 But the memories and the people are the things I'll treasure most. The carnies, the local rednecks, the workers at the 'possum processing plant, the Grand 'Possum Poohbah, the other contestants. Even Berthalynn and all her naysaying criticisms. (Yes, I have all my teeth. You don't. Let it go, already!)

The glamorous events that I made many a special appearance at during my year of 'possum promoting. All the trailer park grand re-openings, the Pork-N-Possum Feeding Trough restaurant chains I made many a 'possum, the other white meat, sorta pitches in. And who can forget my coronation at the Moonshine and Fried 'Possum Carnival?

I was once again there to pass my rhinestone encrusted taxidermied crown to the next generation of County 'Possum Queen. The locals had created a petition of sorts to keep me as the permanent 'Possum Queen of the county. Likening me to their very own Ellie May Clampett, there was a loud protest against the termination of my reign. Though I was extremely flattered by their comparisons, I knew it was time to step down.

After I passed the crown to this year's winner, 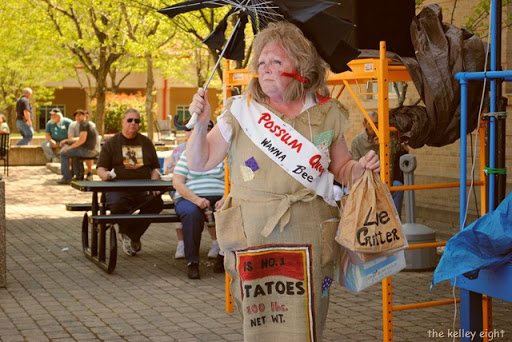 Many a redneck needed time alone to collect their thoughts. 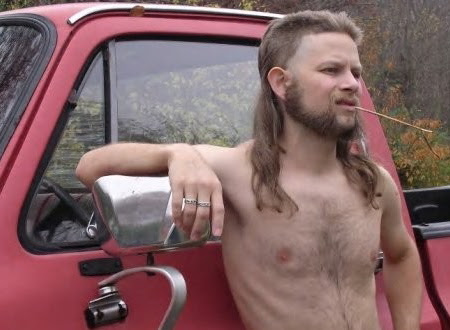 Others took time for quiet reflection.

Still others were paralyzed with disbelief that I would actually step down. 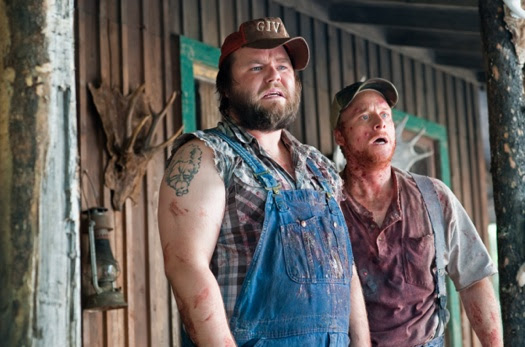 Though I'm sad to give up the title, I know it's for the best. Thanks for coming along for the ride with me. And a heartfelt possumy "thank you" to all those who supported me. Cheers! 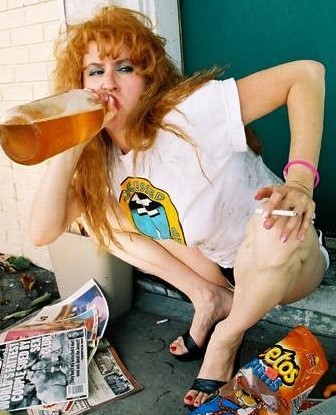 I know I've Talked About Them Before

But, I'm a fan. OK Go are a creative bunch of guys.

I love the lines -
Lipstick and Callous and Fishnets and Malice
Oh Darling, you're a million ways to be cruel

I should, I wish I could, maybe if you were, I would, list of standard-issue regrets.
One last 80 proof, slouching in the corner booth.
Baby, it's as good as it gets.

There were so many ludicrous and bizarre happenings around here last year, I don't quite know where to start. Oh yeah, how about at the beginning, hmmm?

January
I let it slip that I still wanted Freezy Freakies. I explained why I loved crappy books, and strange things were heard from the back of the minivan. I also declared B. B. King to be a national treasure.

February
February was a ruthless bitch. The oldest urchin was going through her cat scan and blood tests, and my writing was completely derailed (and I'm not sure I've gotten back to it since). Though in the beginning of the month, I gave a behind the scenes look at the 'Possum Queen selection process and the Moonshine and Fried 'Possum Carnival.

March
In March, I detailed my tour of the local Army Navy Surplus store in our area and admitted to other field trips I wanted to go on. But I had no takers to go with me. Crazy. It was also filled with author interviews. Susan Gourley. Misty Simon. And Natalie Damschroder. They all aced the Sea Monkey S.A.T. portion of the interview. I also enumerated many of the diversified uses of 'Possum.

April
Author interviews continued with Vicky Burkholder and Megan Hart. I was also interviewed as the 'Possum Queen at Sue Gourley's blog. So interviews and other nonsense abounded.

May
I announced my new #1 field trip to go on is to the roller derby. It was my writer's RETREAT!! I shared some very crass Krass Brother's (store of the stars!) commercials I grew up with. And fulfilled my 'Possum Queen duties by plugging 'possum (the second other white meat, sorta) for your Memorial Day BBQ.

June
Besides the usual nonsense, the youngest urchin got nursemaid's elbow, and the oldest urchin contracted Lyme Disease. We'll just move on.

July
Summer re-runs, my latest addiction and The 'Possum Queen swimsuit competition were the highlights.

August
The backyard carny came to town! The second carny report was railroaded by the possibility of a skunk in my cellar.

September
My latest obsession of sideburn art was revealed. And I shared my new discovery of the many uses of taxidermied squirrels.

October
I discussed the three R's at Tongue In Cheek. Writing was only one of them. Rummaging and Ridiculousness were the other two. I also recapped the NJRW's conference.

November
I invented the game of stinkbug chicken and played it with the Man - though he didn't know. I also opened my store, The Angry Villager.

December
I wrote several open letters to the craziness at Chez Quinn. I expressed my desire to stage a coup of my Zumba class.

So there are the highlights of 2011. Some of my greatest hits are in there. Thanks for coming along on the ride. So, what were your greatest 2011 hits?
Posted by Ava Quinn at 8:22 AM 4 comments:

I don't know if you've noticed, but in my profile one of my interests (along with motorcycle riding) is dancing with abandon. This totally qualifies. Go white girl! Get your groove on!